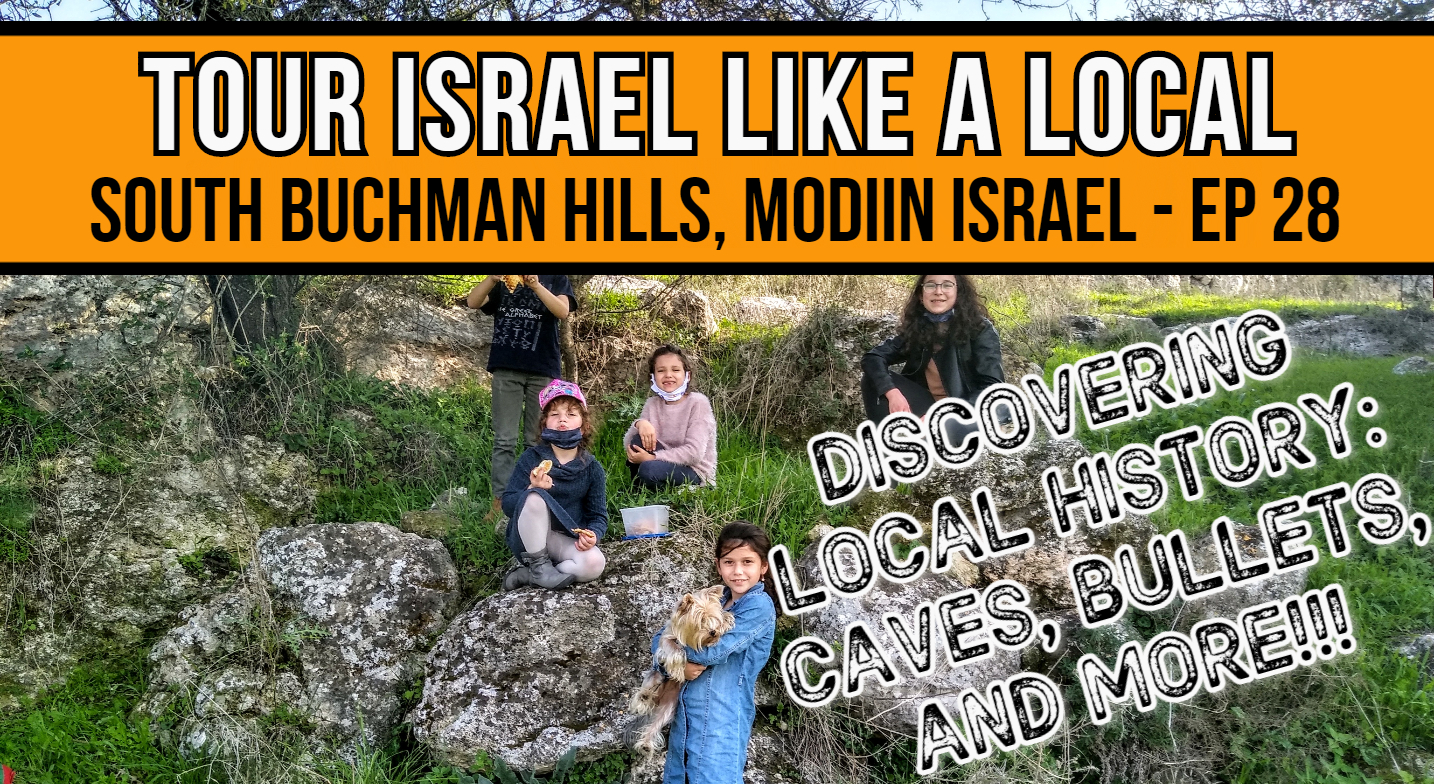 Posted on January 6, 2021April 7, 2021 by Bengineer
In this week’s episode, Episode 28 of TOUR ISRAEL LIKE A LOCAL series, I took my kids to explore the local hills surrounding the city of Modiin. We found old wine presses, caves, all sorts of insects and flowers, porcupine quills, machine gun bullets, and more. Come along for the ride.

Three ruins stretch across the southern hills of Modi’in. Horbat Hadat, in the excavations of which a remains of a magnificent Byzantine church were discovered, and the place was declared an archeological site; Horbat Berit, originally called Bira (small well), but its name passes. In Vira there was an Arab settlement in the center of which was a deep well, the only one in the area, stone terraces, an orchard and rock-hewn caves; And the ruin of Kanuba (Kanbuta, the ruin of the cauliflower), which is at the top of the hill.

There is a large palm tree near the remains of a structure, open cisterns for storing water and stone-hewn troughs to saturate the flock. In fact, archeology and history (as well as the landscape) have left green nature with an adjacent city.

A small path leads to the hills. Climb south on the stone terraces path pulls west, around the hill, leveling a narrow path with an abundance of green vegetation, yellow blooms, pink cyclamen, white mustard and more. On the slopes there are many almond trees, which these days are covered with a fragrant flower dress; Burial caves, some of the lintels of which are hand-carved by an artist; Small springs flowing into small, clear pools; A path marked in black climbs to the top of the hill, and to the north there is a large block of intelligence houses.

At the summit, the views from the other side reveal the introduction to Horon, Beit Likia and the twists and turns of the Ayalon River. Continuing east, you can find some sturdy cypresses and a huge pine tree whose winds have broken its top. The pine did not give up, grew a beautiful landscape, and a romantic visitor attached to its branches a swing for lovers. The path leads to the ruin of Canova, where a huge palm tree rises next to a ruined stone structure, a rock-hewn trough and water canals. On the rocks are small round niches used to make olive oil by crushing the olives in the niche. This work was reserved for the elderly and disabled during the harvest period.